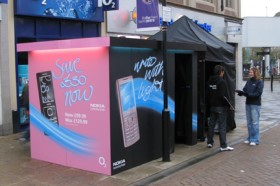 Nokia where launching their latest handset and wanted to create a memorable and unique piece of experiential marketing for local shoppers at some of their stores in prime locations.

After discussing the campaign for the handset with Nokia and their PR company, the key to a successful activation was discovered to be the ability to “write with light”. We set about creating a solution that involved using photographic techniques we had not been tasked with before. Different coloured LED’s where supplied to the members of the public to use for the imagery. We also worked with the production team to design and create two bespoke blackout tents that we transported for the tour. As the activation needed to be full self contained, a generator was used for power.

What The Client Said

This was an unusual brief, but Fantasy Imaging created a viable solution that created the look and style of imagery we where after. The number of prints they produced was much greater than we had planned for!

Keep up to date with all our latest innovations and promotions.