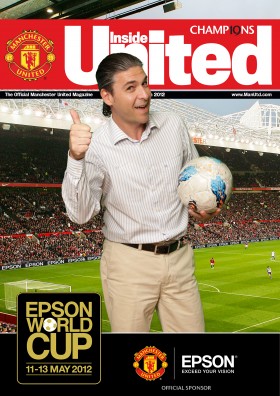 Epson host an annual retail conference for their staff. As they manufacture their own printers and media they wanted to show off their capabilities by ensuring that all their guests left with a branded keepsake from the event!

The two day event itself was divided into two afternoon sessions and two evening sessions. We made sure that we were able to break down our equipment set up and re-set very quickly as well as move around the from location to location. Epson supplied us with printing equipment and media which we used to print the completed images.

As the event was held at Old Trafford, we wanted a Manchester United theme for our photos, so we created a couple of different ‘Inside United’ magazine covers and ex Manchester United and England striker Andy Cole was good enough to pose in front of the green screen with some of the guests. The finishing touch was to make it appear as if the people being photographed were standing on the hallowed turf of Old Trafford!

We produced Over 500 magazine covers over the course of two days.

Keep up to date with all our latest innovations and promotions.